There's a new version of the HubSpot API

Check out the new API

Check out the Ecommerce Bridge V2 API docs in the preview version of our API Explorer and let us know what you think in our forums!

The Ecommerce Bridge API (EB) provides a way for integrators to sync ecommerce data into HubSpot. It also facilitates creating a set of out-of-box ecommerce features for HubSpot users. These features include:

To begin using Ecommerce Bridge, you'll need to know how ecommerce data is structured in HubSpot and how to take advantage of the features that build on our ecommerce framework.

How to use the Ecommerce Bridge

To use EB you need to:

In order to use EB you must describe how the structure of data in your system maps to native objects in HubSpot.

EB allows you to map to properties of the following native HubSpot objects:

Your ecommerce data can be mapped to HubSpot object properties in several ways:

Once you've decided how to map your ecommerce data to HubSpot, you can create property mappings that EB will use to sync. A property mapping is simply the name of a property in your system, the internal name of a HubSpot property, and optionally a data type that describes the format of the property. They are modified through settings.

Your settings have the following fields:

Let's say your ecommerce platform represents a shopper by name, email, and phone number. You might also represent unique orders with a name, status, URL, and a timestamp for when the order was completed. You could then define your EB settings as follows:

Note: When developing a custom solution for an individual HubSpot account, the appId can be omitted and the API key for that account should be used instead.

The above request does not create any properties in HubSpot. But whenever your integration references a contact phone_number, EB will modify the contact's mobilephone property. This means that when sending ecommerce data to HubSpot through EB you can continue to use your own terminology and property names. HubSpot will handle the conversion.

Note: The property mapping for a Product image URL should be defined as a AVATAR_IMAGE dataType.

More information about how to set up your property mappings is in the Settings API documentation.

An ecommerce store is not currently represented as a native object in HubSpot. Instead, defining a store through EB is a way to organize and manage data, and all data sent through EB will be attributed to a store. 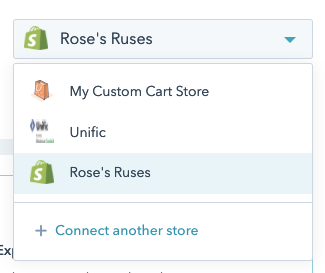 A store has the following fields:

For example, when a user connects your integration to their HubSpot account you can create a store as follows:

With OAuth token in the Authorization header, see OAuth 2.0.
Note: When developing a custom solution for an individual HubSpot account, the OAuth token can be omitted and the API key for that account should be used instead.

The first time a store is defined in a HubSpot account, we do some additional setup.

Note:
The ecommerce pipeline should not be modified. This pipeline is used by all integrations using the Ecommerce Bridge, and any updates to any store will revert this pipeline to its default label and stages.

If any of those setup items fail, then the store will not be created.

Uninstalling your app will automatically delete any stores created by your app. This will also disable any workflows that are based on the store.

After you've defined how to translate your data into HubSpot, and defined at least one store, you're ready to notify HubSpot of changes to ecommerce objects in that store. Sync messages represent a creation, update, or deletion of an object in your system that should be reflected in HubSpot.

Sync messages have the following fields:

Messages have the following fields:

Say a user has connected your integration to their HubSpot account, and you've defined an Ecommerce Bridge Test Store. When a vendor creates a product in your ecommerce system, you can then create that product in HubSpot:

With oauth token in the Authorization header, see OAuth 2.0.
Note: When developing a custom solution for an individual HubSpot account, the OAuth token can be omitted and the API key for that account should be used instead.

This product will be created in the HubSpot account's Product Library (visible under Sales settings).

If a customer then makes a purchase from that same store, you can sync the corresponding contact, deal, and line items representing that transaction:

The above calls will create a contact with one deal visible on the contact record. That deal will reflect the line item and show that two (2) Orange Widgets were purchased. If multiple products were purchased in the same deal, then multiple line items should be created.

EB will asynchronously apply changes from these sync messages to HubSpot. This process involves translating messages using the property mappings, validating against the current state of the user's properties, and then applying property changes to users' accounts.

A successful response from the API does not mean that a change was made to a HubSpot object, just that the message was successfully enqueued. There are two endpoints you should use to monitor the success status of your sync messages.

This first, /sync/status, returns the status of the sync for a specific external object.

But, for example, say you did not include customer_email as a property when syncing information about Daniel. Since email is required to create a contact through EB, the processing would fail and you would see:

The second endpoint you should use to monitor the status of sync is /sync/errors/. This will return all the existing errors for a specific application or account.

The API reference page describes the details of this API in more detail.

Docs for this section or API