There's a new version of the HubSpot API

Check out the new API

As of November 30, 2022, HubSpot API Keys are being deprecated and are no longer supported. Continued use of HubSpot API Keys is a security risk to your account and data. Your API Keys could be deactivated at any time after Nov. 30th, and we recommend that you migrate to Private Apps as soon as possible so you do not lose business-critical functionality.

Supporting imports with the Ecommerce Bridge

Note: Imports are only supported for apps that use OAuth. Imports cannot be used with custom integrations using an API key.

Imports give users of your application a solid user experience when first connecting your app.

Additionally, the import process will automatically process imported objects in the optimized order, which can help speed up the processing of the imported objects, allowing users to see their historical data in HubSpot faster.

In order to support imports, you'll need to set the webhookUri for the Ecommerce Bridge settings for your app. Once that webhook URI is set, users will see the import dialog for any stores created by your app (including the default store). When a user clicks the button to start the import, we'll send a webhook to that URI.

How do users initiate an import?

After a user connects you app to HubSpot, the user will see a "Continue importing" button when viewing the details for the store in their Ecommerce settings. They'll also have the option to view the details for a different store, if they have multiple stores set up. 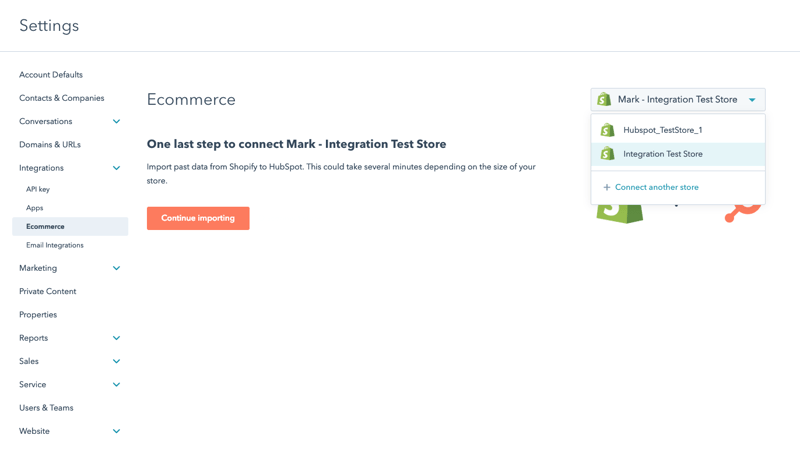 When a user clicks the Continue importing button, we'll send the import webhook to the webhookUri in your app's Ecommerce Bridge settings. 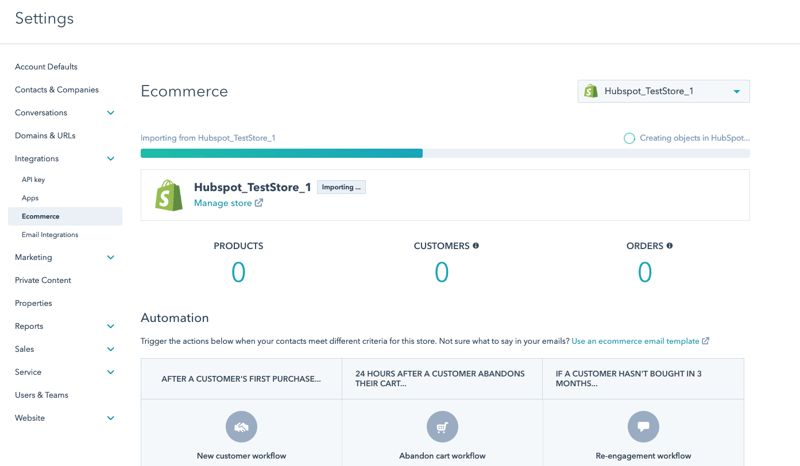 When you are finished importing objects and have signaled the end of the import, we'll show the number of imported objects. There will be an alert message if HubSpot is still creating objects from the import. 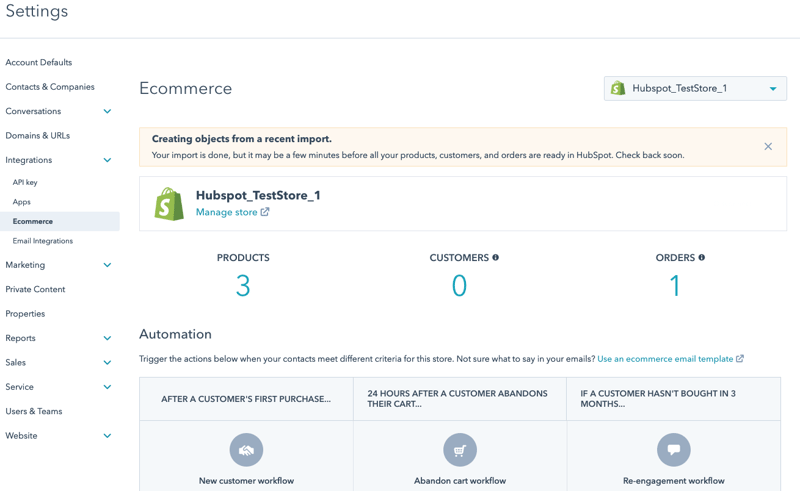 Setting up the import trigger URI.

In order to support imports, the first thing you'll need to do is set up the webhookUri in your apps Ecommerce Bridge settings. This is done using the following endpoint:

Once that webhookUri is set up, users will have the Continue importing button when viewing the details for stores set up by your app. When a user clicks that button, we'll send the following POST request to your URI:

Your response to this webhook POST request must contain the count for each object type that you plan on importing. This is used to generate the progress bar that the user sees.

Now that the import has been initiated, and we know how many records will be imported, you can start importing the data.

Signaling the end of the import for an object

Once you have imported all of the records for an object type, you will need to use the following endpoint to signal the end of the import:

Note: You must signal the end of the import for each separate object type. The import will not be considered complete until this has been done for all 4 object types.